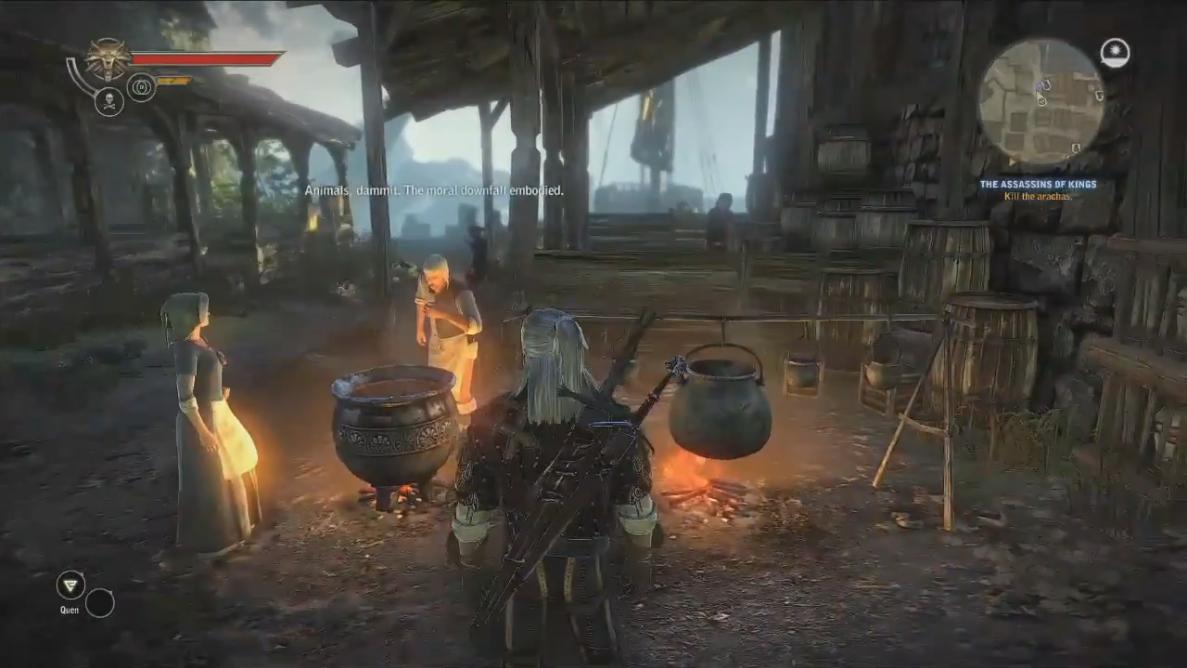 The Witcher 2: Assassins of Kings is a role-playing video game and a sequel to The Witcher. With this update you’ll make sure that your game runs smoothly, without any bugs, and you benefit from the latest features added. NOTE: This new patch requires that you already have the 1.1 patch installed. Requirements: · The Witcher 2: Assassins of Kings · New FREE DLC – “A Sackful of Fluff” is a new quest in Chapter 2 of the gameTo start the quest, visit the eccentric Elthon, who inhabits a solitary hut near the quarry outside VergenThe quest will prove most rewarding to those who demonstrate patience. · Game now supports 4:3, 5:4, and 16:10 aspect ratios. · Item storage has been addedPlayers can now store items from their Inventory at innsTo leave items in storage or collect previously stored items, talk to innkeepers. · A ‘Junk’ panel has been added to the Inventory to provide greater clarity in item classification. · A new menu option has been added under ‘Extras’ – this enables players to view in-game animated sequences (flashbacks, memory flashes, dreams stolen by harpies) outside of the game. · A ‘Quickload’ option has been added under the F9 key. · The game’s HUD can now be hidden in order to produce HUD-free screenshots! On newly installed game copies, the option to hide/show the HUD is available by default under the ‘H’ keyUsers who have modified the key assignments on their installations should go to the ‘Input Settings’ dialogue of the Witcher 2 Configuration Tool to assign a key to this optionPlease note that the game cannot be played with the HUD hidden. · A counter has been added for items placed in quick slots. · Players can now create multiple items in the Alchemy panel. · Issue involving the game not running at 2560×1440 resolution has been resolved. · Issues with nVidia 3D Vision technology have been resolvedPlayers no longer need to uninstall the related drivers. · Assorted improvements have been made in the game’s 3D Vision, SLI and Crossfire functionality. · Assorted improvements have been made for running the game in Ubersampling mode on nVidia cards. · Key bindings have been corrected to enable configuration of mouse buttons for use by left-handed players. · Assorted key binding options have been added to facilitate configuration of controls and quick access to various in-game panels. · Issue related to game settings being reset to defaults upon patch installation has been resolvedPatches no longer reset game settings. · The configuration file is no longer over-written when the launcher/configuration tool is patched and over-written. · The launcher now closes while the game is being patched, thus eliminating the resulting game patching error. · The launcher now closes completely and no longer continues to operate in the background. · ‘Installed game version is invalid or incomplete’ error in updater when free space on system drive is insufficient – message has been corrected to reflect more accurately the nature of the error. · Mutagens are now alchemy ingredientsMinor mutagens drop more frequently than do major mutagens, though the overall mutagen drop rate has been reduced. · Corrections have been made in the mutagen drop rate and in Thorak’s store. · ‘Dragon’ section of Prologue does not become available until after all assault-related sections have been completed, thereby softening the difficulty curve at the start of the game. · During the fight against the kayran, when the bridge collapses, a map pin appears at the end of the bridge to facilitate player navigation and quest completion. · Map pins have been corrected in many quests. · Quen Sign slightly de-buffed – Sign dissipates 20% faster after foes land a blowAssorted minor balance issues related to this Sign have also been resolved. · Issue with oil enhancements not working on silver swords has been resolved. · Issue with Dragon’s Dream bombs has been resolvedDamage to bosses from cast daggers has been reduced by one-half. · Several optimization improvements have been made in the tavern in Vergen. · Problem with music accompanying ‘stealth’ sequences has been resolved. · Issue related to arm wrestling Bart Bargee has been resolvedPlayers can no longer win coin from this character endlessly. · Option to fist fight woman praying at a statue in Vergen has been deactivated. · Mini-game contestants at one of the in-game taverns now switch positions correctly without blocking one another. · Problem involving Fenn’s sword in combat has been resolved. · Problems with herbalist’s gloves have been resolved. · In the Prologue, Geralt retains his steel long sword throughout, i.e., he is no longer automatically equipped with his default sword for the ‘Assault’ sequence. · Problem with some nekkers being immortal has been resolved. · Issue with triggered black screens blocking game progress has been resolved. · Interactions no longer appear on nekker nests after these have been destroyed. · The “Scent of Incense” quest no longer shows up as failed after being completed successfully. · Sudden switch to gameplay just prior to cut scene involving Cynthia and Philippa has been eliminated. · Triss, Roche and Iorveth are now de-spawned before the final credits roll. · Guard pacing cycles have been corrected. · The Redanian messenger in Henselt’s tent can no longer be killed, preventing him from re-spawning. · Elf woman in Vergen no longer strikes a T-pose. · Rotfiends feeding on corpses no longer re-spawn after corpse is burned. · Several fixes have been made in the functioning of in-game populaces. · Numerous problems with cameras in dialogue sequences have been resolved. · Assorted corrections have been made in dialogue sequences (including King Foltest’s gestures on the town walls in the Prologue). · A progression break in the ‘In the Claws of Madness’ quest has been eliminated.