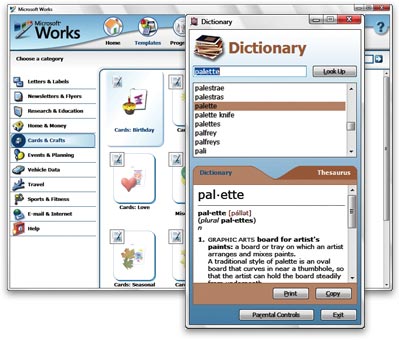 Microsoft Works has built-in compatibility for the Microsoft Office document formats (DOC and XLS), including, but not limited to, the ability of the Works Word Processor to open Microsoft Word documents and the ability of the Works Spreadsheet to open Microsoft Excel workbooks. Newer versions include task panes but do not include significantly updated features. Even in the latest version (Version 9.0), the Windows 95-era icons and toolbars have not been updated to stay consistent with modern application software. Version 9.0 which offers Windows Vista compatibility, is available in two editions, an advertisement-free paid version, available in retail and OEM versions and an ad-supported free version (Works SE) which is available only to OEMs for preinstalling on new computers. While its utility for larger organizations is limited by its use of proprietary native .WKS (spreadsheet), .WDB (database) and .WPS (word processor) file formats, the simplicity and ease of integrating database/spreadsheet data into word processor documents (e.g., mail merge) allow it to remain an option for some small and home-based business owners. Version 4.5a is particularly noted in this respect. The database management system, while a “flat file”, i.e. non-relational, allows the novice user to perform complex transformations through formulas (which use standard algebraic syntax and can be self-referential) and user-defined reports which can be copied as text to the clipboard. By installing the 2007 Office System Compatibility Pack, the Works Word Processor and Spreadsheet can import and export Office Open XML document formats, although they are converted rather than being operated upon natively. The Works Calendar can store appointments, integrates with the Windows Address Book, as well as Address Book’s successor, Windows Contacts and can remind users of birthdays and anniversaries. It supports importing and exporting iCalendar (.ICS) files. It does not however support subscribing to iCalendar files or publishing them online via WebDAV. Up to version 8, using the Works Task Launcher, the calendar and contacts from Windows Address Book could be synchronized with portable devices. In Works 9.0, the sync capability has been removed.