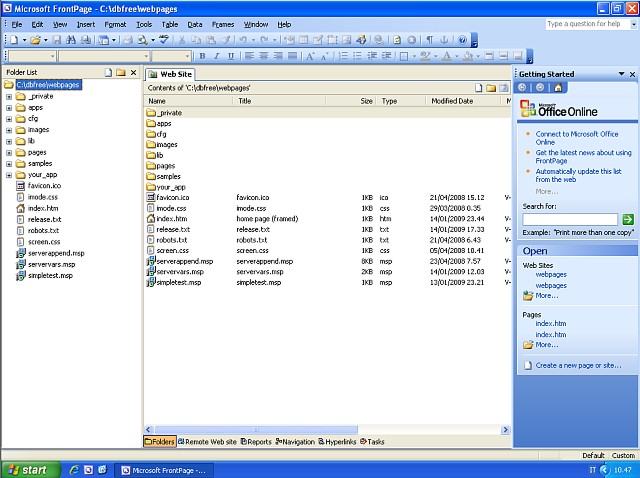 Some of the features in the last version of FrontPage include: * FrontPage 2003 consists of a new Split View option to allow the user to code in Code View and preview in Design View without the hassle of switching from the Design and Code View tabs for each review * Dynamic Web Templates (DWT) were included for the first time in FrontPage 2003 allowing users to create a single template that could be used across multiple pages and even the whole Web site * Interactive Buttons give users a new easy way to create web graphics for navigation and links, eliminating the need for a complicated image-editing package such as Adobe Photoshop * The accessibility checker gives the user the ability to check if their code is standards compliant and that their Web site is easily accessible for people with disabilities. An HTML optimizer is included to aid in optimizing code to make it legible and quicker to process * Intellisense, which is a form of autocompletion, is a key new feature in FrontPage 2003 that assists the user while typing in Code View. When working in Code View, Intellisense will suggest tags and/or properties for the code that the user is entering which significantly reduces the time to write code. The Quick Tag Editor shows the user the tag they are currently in when editing in Design View. This also includes the option to edit the specific tag/property from within the Tag Editor * Code Snippets give users the advantage to create snippets of their commonly used pieces of code allowing them to store it for easy access whenever it is next needed * FrontPage 2003 includes support for programming in ASP.NET a server-side scripting language that adds interactivity to Web sites and Web pages * FrontPage 2003 includes support macro in VBA