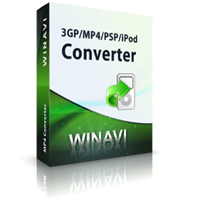 WinAVI 3GP/MP4/PSP/iPod Video Converter is a software designed for MP4/3GP/iPad/iPod/iPhone/PSP format conversion. This converter can convert almost any formats except BD to MP4/3GP/iPad/iPod/iPhone/PSP with super fast converting speed. It can convert almost all video formats except BD as input, such as DivX, XviD, MOV, rm, rmvb, MPEG, VOB, DVD, WMV, AVI to iPad/iPod/iPhone/PSP, MP4 player or smart phone. It has an unmatchable speed and high quality as well as easily transfer your video files to your iPad/iPhone/iPod/PSP directly. Some details:
1. Converts all formats to Apple iPod Video.
2. Converts all formats to Sony PSP.
3. Converts all formats to MP4 format that can be played on general portable video device such as MP4 player.
4. World’s fastest video conversion speed.
5. User-friendly interface that is easy to use.
6. Transport video files to iPod/PSP directly. No need to install iTunes or other softwares.
7. Supports batch conversion.
8. Stunning video and audio quality.
9. Supports clip/zoom/soften the video.
10. Supports adjust many video/audio options for MP4 files. For example, video/audio sample rate, bit rate, video size…
11. Has the option to preview the video in real-time.
12. Has the option to automatically shutdown your computer when the conversion has been completed.
……