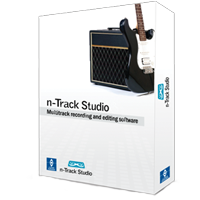 n-Track Studio is an audio & MIDI multitrack recorder that turns your PC or Mac into a full-fledged recording studio. You can record and playback a virtually unlimited number of audio and MIDI tracks. The program supports simultaneous recording from multiple 16 and 24 bit soundcards, and real-time audio effects can be applied non-destructively to each track. Built-in effects include Multiband Compression, Delay, Graphic EQ, Pitch Shift and time stretch, Parametric EQ and spectrum analyzer with guitar tuner. The program can use third party VST, AU and DirectX plug-ins to process in real-time audio signals. Effect can also be used to process the recorded signal in real-time so that the computer can act as a multi-effects device. MIDI tracks can be imported end exported to regular MIDI files, and edited using the built in piano-roll based MIDI editing window. The program supports instruments plug-ins for sample accurate software MIDI playback. It also supports ReWire technology to stream audio from other compatible audio programs. All the audio tracks are saved as standard wave files and mixed “on the fly” during playback. How it works – Record a base track (i.e. rithm guitar) with your PC or Mac built-in mic or with an external mic – Plug a standard headphone, record a solo or vocal track while listening to the rithm track – Press play to listen to the multitrack recording, use the mixer to adjust levels, pan, apply EQ, compression, reverb etc. – Save the song to a single .m4a or .mp3 file that you can share via interne, send by email or use it to create and audio CD Main features – Supports VST, AU and DirectX plugins and instruments – Compression, Delay, Graphic EQ, Pitch Shift and time stretch effects, Parametric EQ with Spectrum analyzer + chromatic guitar Tuner – Record and playback from multichannel audio devices – The max number of tracks depends on the computer speed, with a typical laptop you can use 20 or more tracks – n-Track is currently the only only cross-platform multitrack recording software available for Mac, Windows, iPhone, iPad and iPod Touch – Languages included: English, Spanish, French, German, Italian, Dutch, Portuguese Compatibility with plug-ins, 64/32 bit issues – The program comes in both 32 and 64 bit format (universal binary). – The 64 bit version can load 32 bit plugins via the built-in nBridge module.