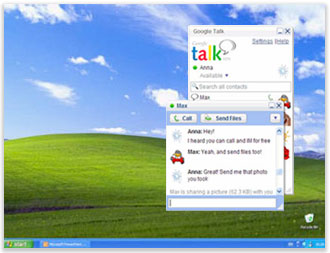 After the rumor of a Google-branded “communications tool” service had been reported by The New York Times and detailed by the Los Angeles Times on August 22, 2005, the subdomain talk.google.com was found to have an active XMPP server. Two methods of logging into the server were discovered soon after and the ensuing response by eager bloggers revealed to numerous others how to login before the official release by Google. On the evening of August 23, many logged-in users using port 5222 to connect were disconnected and unable to log back in. Users using port 5223 to connect were still able to log in, and at 04:12:52 UTC those users received a broadcast instant message from gmail.com, an apparently official username used by Google to communicate with their user base, that stated “The broken link has been fixed. Thanks for being our first users!” Port 5222-connectivity was found to have been re-enabled. On August 24, Google Talk was officially launched. On December 15, 2005, Google released libjingle, a C++ library to implement Jingle, “a set of extensions to the IETF’s Extensible Messaging and Presence Protocol (XMPP) for use in voice over IP (VoIP), video, and other peer-to-peer multimedia sessions.” Libjingle is a library of the code that Google uses for peer-to-peer communication, and was made available under a BSD license. On February 7, 2006, Gmail added the ability to chat with a built-in XMPP client. On March 14, 2007, Google released the Google Talk Gadget, an Adobe Flash-based Talk module that can be added to iGoogle (formally the Google Personalized Homepage) or embedded in any web page, thus, allowing one to chat from any operating system which is supported by Adobe Flash Player as long as Adobe Flash Player is installed. On November 26, 2007, Google Talk released Group Chat capabilities. Prior to this, users could chat with only one person per window. Group chat allows many users to chat with each other in an environment similar to IRC. On December 6, 2007, Google upgraded its Gmail integrated chat to include AOL Instant Messenger chat capability. This allows Gmail users to sign into the AIM chat service and communicate with any AIM user while still being signed on to the Google Talk service. The Google Talk gadget and client have not been upgraded to enable this feature yet, and no announcement has been made as to when it will be made available. On February 25, 2008, Google added a feature called chatback, which allows a Google Talk account owner to chat with people who don’t have one. The account owner first has to create a badge, which can be included in webpages. This badge shows the current availability of the owner. Clicking on the badge results a chat request notification to the owner who can respond by clicking on the specified URL. During the conversation both parties have to use the Google Talk Gadget and both parties remain anonymous to each other, even the Google Account name of the owner is not revealed to the other peer. On November 11, 2008, Google Chat (voice and video chat) was launched enabling computer to computer voice and video chat.