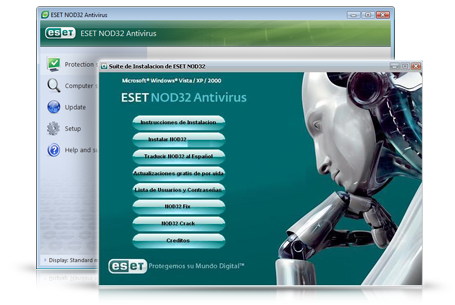 ESET NOD32 Antivirus, commonly known as NOD32, is an antivirus software package made by the Slovak company ESET. ESET NOD32 Antivirus is sold in two editions, Home Edition and Business Edition. The Business Edition packages add ESET Remote Administrator allowing for server deployment and management, mirroring of threat signature database updates and the ability to install on Microsoft Windows Server operating systems. NOD32 was created in the early 1990s when computer viruses were becoming increasingly prevalent. Initially the program gained popularity with IT workers in Eastern European countries, as ESET was based in Slovakia. Though the program’s abbreviation was originally pronounced as individual letters, recent worldwide use of the program has led to the more common single-word pronunciation, sounding like the English word nod. The company reached its 5000th update to virus definitions on April 5, 2010. The acronym NOD stands for Nemocnica na Okraji Disku (“Hospital at the end of the disk”), a pun related to the Czechoslovakian medical drama series Nemocnice na okraji města (Hospital at the End of the City).