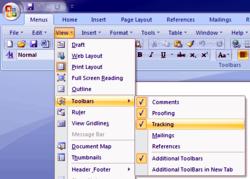 Classic Menu for Office 2007 is an application that display menus and toolbars of Office 2007. Could not see the menus in the last version of MS Office? Just download and install this software, you will see and enjoy classic menus and toolbars of Office 2007(include Excel, Word and PowerPoint), as in the Office 2003/XP. The familiar Office 2003 interface has been replaced by the Ribbon. It is cool and powerful, but many users can’t find some of the features because they are hidden or moved to other places. If you install Classic Menu for Office 2007, these menus and toolbars will be retrieved and shown. All new features items of Microsoft Office 2007 have been added into the classic menu and toolbars. Supports all languages that are supported by Microsoft Office 2007: English, French, German, Italian, Spanish, Portuguese, Japanese, Arabic, Korean, Chinese. You can add the menus and toolbars to Quick Access Toolbar, then you can minimize the Ribbon and finish all operations without Ribbon.What’s new in this version: Version 6.05 user can update the license name, license code and license number after input the license.