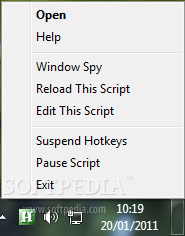 Customize your keyboard, joystick, and mouse with an open source scripting language (AutoHotkey) that is backward compatible with AutoIt v2. AutoHotkey it includes a quick-start tutorial, an automatic script writer (macro recorder) that records your keystrokes and mouse clicks, and a comprehensive help file. Automate almost anything: Send keystrokes & mouse clicks; launch programs / documents; work with the clipboard, registry, & soundcard settings. In addition to its automation features described below, AutoHotkey excels at hotkeys, able to make virtually *any* mouse/joystick button, keyboard key, or combination into a hotkey. AutoHotkey it can also individually disable or override Windows’ own shortcut keys, such as Win+E and Win+R. It may also help alleviate RSI; for example, it can create substitutes for Alt-Tab using keys, mouse wheel, or buttons. With AutoHotkey, you can: · Automate almost anything by sending keystrokes and mouse clicks. You can write a mouse or keyboard macro by hand or use the macro recorder. · Create hotkeys for keyboard, joystick, and mouse. Virtually any key, button, or combination can become a hotkey. · Expand abbreviations as you type them. For example, typing “btw” can automatically produce “by the way”. · Create custom data entry forms, user interfaces, and menu bars. See GUI for details. · Remap keys and buttons on your keyboard, joystick, and mouse. · Respond to signals from hand-held remote controls via the WinLIRC client script. · Run existing AutoIt v2 scripts and enhance them with new capabilities. · Convert any script into an EXE file that can be run on computers that don’t have AutoHotkey installed. · Change the volume, mute, and other settings of any soundcard. · Make any window transparent, always-on-top, or alter its shape. · Use a joystick or keyboard as a mouse. · Monitor your system. For example, close unwanted windows the moment they appear. · Retrieve and change the clipboard’s contents, including file names copied from an Explorer window. · Disable or override Windows’ own shortcut keys such as Win+E and Win+R. · Alleviate RSI with substitutes for Alt-Tab (using keys, mouse wheel, or buttons). · Customize the tray icon menu with your own icon, tooltip, menu items, and submenus. · Display dialog boxes, tooltips, balloon tips, and popup menus to interact with the user. · Perform scripted actions in response to system shutdown or logoff. · Detect how long the user has been idle. For example, run CPU intensive tasks only when the user is away. · Automate game actions by detecting images and pixel colors (this is intended for legitimate uses such as the alleviation of RSI). · Read, write, and parse text files more easily than in other languages. · Perform operation(s) upon a set of files that match a wildcard pattern. · Work with the registry and INI files. · Fixed FileRemoveDir setting ErrorLevel incorrectly.